FEMINISM FOR ME IS AN ABSOLUTE COMMITMENT

Vesna Kesić, our dear feminist comrade, anti-nationalist, anti-war activist, journalist, and feminist author, passed away on 27 December 2020, at the age of 72, in Zagreb, Croatia. The feminist community of the post-Yugoslav region lost a feminist heroine who believed in women’s organizing against war and nationalist regimes. Her life was a feminist adventure.

To keep the memory of Vesna Kesić alive, we invite you to write a paragraph remembering her, send us an anecdote or a photo on the email: memoryvesnakesic@gmail.com

Vesna Kesić graduated in psychology and sociology at the University of Zagreb in 1974 and worked as a journalist for almost two decades. In her own words, in the early ’90s, “disgusted with journalism in wartime conditions,” Vesna Kesić left journalism and focused her energy and passion on feminist and anti-war activism.

Vesna Kesić liked to say that she had “the feminist click” at the historic international feminist conference “Comrade-woman” in Belgrade, 1978.  From then on, she co-founded a series of feminist initiatives aimed at transforming society and its patriarchal oppressions.  The first of them was a Feminist discussion group in Zagreb, Women, and Society, within the Croatian Sociological Society in 1978. After that, she became one of the leaders of the transformation of values of civil society, co-founded and actively participated in the following organizations and groups:

Her passion for activism is reflected in many other international and local networks, among others in:

From 1998-2002 she was an associate at the Transregional Center for Democratic Studies, New School University, New York, and in 1998 an associate at the Center for Studying Women and Society, CUNY, New York.  The outcome was her Master degree research: “The Status of Rape as a War Crime in International Law: Changes Introduced After the Wars in the Former Yugoslavia and Rwanda,” published as “Establishing Rape as a War Crime” in Transforming A Rape Culture  (eds. Martha Roth et al., 2005).  “Truly seminal work of Vesna Kesić quickly became important reading in both Gender and Balkan studies here in the U.S. and was appreciated as a fresh example of a feminist approach to the field of international relations.” Elzbieta Matynia, New School for Social Research, 2020.

During wartime, Vesna Kesić wrote extensively against nationalism, war, sexual violence in war, and similar issues. She used to say that the anti-war movement she was part of did not stop the war but was crucial in establishing values for the future democratic society and the next generation to come. Fearless and one who refused to be silenced, she was one of the so called “Five Witches of Croatia” – the feminist writers and intellectuals accused in mainstream Croatian media in the spring of 1993 of being ‘witches’ for their outspoken criticism of the Croatian nationalist state.

Vesna Kesić actively participated in many international feminist conferences around the world. Apart from the U.N. Human Rights Conference in Vienna 1993, she participated at the U.N. Conference on Women in Beijing in 1995. She was also involved in WICZNET International Women in Conflict Zones Research Network: A Comparative Study of the Issues Faced by Women as a Result of Armed Conflict: Sri Lanka and the Post-Yugoslav States, organized by York University, (1998-2000).

Vesna Kesić was a brilliant feminist thinker and loved discussions and debates in which she took her freedom to overturn the political standpoints with which she disagreed. Famous is her Response to Catharine MacKinnon’s Article “Turning Rape Into Pornography: Postmodern Genocide” (5 Hastings Women’s L.J. 267, 1994) in which she uses her feminist knowledge and wit to show that the political implications of Catherine MacKinnon arguments are not supporting the feminist movement in the region that wants to develop feminist values and solidarity in the interpretation of the sexual war crimes, but on the contrary stand in line with the nationalists’ argumentation of ‘genocidal nature’ of perpetrators/criminals in which feminist constructionists do not believe in and which are in contradictions with the feminist understanding of rape as a form of violence/crime against women.

The feminist work of Vesna Kesić and her insistence in feminist alliances across antiwar activists of the nationalist states has left an everlasting mark in the history of our post-war Yugoslav region.

After 2001, important in the region as it marks the end of all the wars in the post-Yugoslav region, Vesna Kesić continued to be active as a lecturer and researcher. She taught courses on “Understanding Violence” & “Models of transitional justice” at the Center for Peace Studies, Zagreb, from 2000 to 2003, worked for a while in the new government as a Media advisor for the newly established  Ombudsperson for Gender Equality (2003) and as a research project leader at the Center for Women Victims of War / Rosa.

Despite her health problems and walking limitations in the last few years, she  actively worked on several issues:

In 2017 she was among the initiators of the “Nada Dimić Award” for work in the cultural and artistic field of the City of Zagreb “for those whose provocative cultural and artistic practices are motivated by radical changes in economic, social, and political conditions.” Nada Dimić was a Yugoslav communist, antifascist partisan in the Second W.W. and was tortured to death in a concentration camp in 1942 at the age of 18.

In 2018 Vesna Kesić was one of the initiators of guerrilla street actions in Zagreb: “Master of her own body” against attacks on abortion rights and “Against Gender Ideology – For Gender Equality” action against attacks on Istanbul Convention.

For several years, starting with a case study in 2013, Vesna Kesić worked intensely on the historical documents and collection of narratives of citizens of two ethnic groups from a small village with two names Španovica / Novo Selo in Croatia, where the socio-political changes affected collective memory and created two distinct histories of the same place.  The outcome of her research is an excellent documentary film, “That Other Village” released only a few months before her death.

Press conference on the Ratification of the Istanbul Convention by Croatia, Center for Women’s Studies, Zagreb, 2018.

One of Vesna Kesić dreams during the anti-war activism was to live on the Adriatic coast after the war. She fulfilled her desire and got a beautiful stone house on the car-free Island of Prvić in the Šibenik archipelago. There she spent most of her summers for the last two decades, surrounded by her beloved cats. She also initiated a project to support stray cats naming it Island of happy cats.

Vesna Kesić was actively coping for a long time with serious health problems – Bechterew’s disease and an advanced COPD. Even though her health was not well, her spirits were high, and we have hoped to have her among us for many more years. Unfortunately, shortly after returning from her Island, on Friday evening of 25 December, Vesna Kesić was admitted to the hospital for pneumonia due to COVID-19. She passed away only two days later, on early Sunday morning on 27 December. Her comrades are left heartbroken.

In the coming months, we hope to collect as many threads as possible of Vesna Kesić work, articles, interviews, the memory of her by the feminists of the world…  We want to do it because we love her. We also want it because we believe that all of us, feminists, friends, antiwar and social change activists and scholars, her peers, and younger generations, can learn from her legacy.

In sister love and warm sadness, 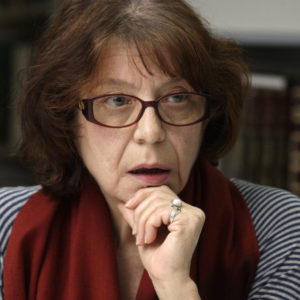